I’ve been a fan of the B-52s for more than 20 years, fueled primarily by my obsession for Kate Pierson — a woman who has one of the best voices in the music biz, and one time collaborator of Michael Stipe and Iggy Pop — remember “Candy” from college? Amazing. I really fell in love with them when they played the Atlanta Pride Festival back in ’99, and again last year at Radio City Music Hall as part of Cyndi Lauper’s True Colors Tour. RCMH is a fine venue, but not for the B-52s…

Fast forward to August 2009, Highline Ballroom’s programming of the new “beach” at Governor’s Island in New York Harbor. Outdoors, sand, sangria, Cindy Wilson’s beehive. It doesn’t get much better than that. I’m in love with this venue. Lower Manhattan looming with a breeze coming off the harbor, Brooklyn in the distance, did I mention sangria? It’s another reason I love New York — a forgotten island slowly being regained by New Yorkers as it’s newest park. Go there!! The ferry is free!!

The four Georgia girls — the youthful looking Keith Strickland, the “what the hell am I doing here?” Fred Schneider, the FABULOUS Cindy Wilson in a vivid plum dress, and my girl, the vivacious and incomparable Kate Pierson — quickly captured the diverse audience and got them singing and dancing (unlike the Radio City crowd). Working it at 60ish, I can’t keep my eyes off Kate’s red hair, body glitter and her Annette Funicello beach dance moves. I love her young-at-heart spirit. God bless you, Kate (and Cindy!!)

The B-52s did not disappoint, quickly moving through many of the new songs off their 2008 drop, Funplex, as well as a few classics like “My Own Private Idaho.” Forty-five minutes into their set, during “Roam,” a mighty wind overtook the crowd and caught the backdrop in the wind… cut to Keith killing the song and exclaiming, “see you in an hour.” Exit Fred, Keith, Cindy, Kate… Enter monsoon. Thunder, lightening, torrential rain. My friend Brian and I made a bee-line for the bar. More sangria! Most of the audience ran for the dining tent. We opted for the bar cart overhang. Drowned rats.

Sadly, the B-52s didn’t return, but it was an unforgettable concert — not to mention a great New York moment. Let’s hope for a return of the B-52s in 2010 at Governor’s Island. I’ll be there. Perhaps I’ll FINALLY get to hear them perform “Deadbeat Club” live!! 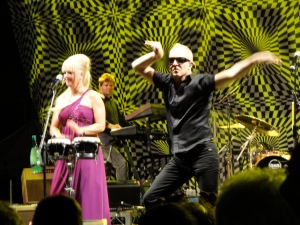 Fred in his own private Idaho. 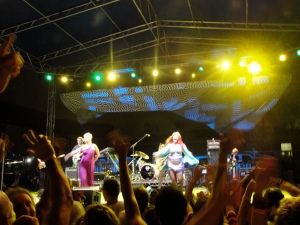 B-52s backdrop blowing in the wind.