Finally, my first concert at Hammerstein Ballroom at Manhattan City Center, to see the Pet Shop Boys and their Pandemonium Tour to support their latest album, Yes! Love my PSB, but also great to scope out my spot for Kelly Clarkson and Kylie Minogue who play the same venue in October!

The set is a wall of white boxes with Chris Lowe’s sound stage on stage left. The last time I saw the Boys was at the Tabernacle in Atlanta in 2006. Hammerstein is bigger and grander, and perfectly suited for this show. Frontman Neil Tennant and Chris finally emerge from two towers of boxes to “Heart.” If the PSBs are good at anything, it’s sticking to a concept! They entered wearing boxes on their head, as were their back-up singers and dancers. They quickly moved into their new material with “Did You See Me Coming,” and “Pandemonium,” and an oldie but goodie, “Left to My Own Devices.” Once “Building a Wall” got going, the stacks of boxes collapsed and stage hands in white reconfigured the boxes into a different set, a trend that occurred throughout the show. How cost efficient, simple and so visually effective? Pet Smart Boys.

So many highlights, but here were my faves: my 1993 coming out song, “Go West,” (ah, Backstreet Atlanta), a quick mashup in 1996’s Bilingual with “Se A Vida E” and “Discoteca” and of course, “New York City Boy.” What gay boy didn’t have THAT song on their iPod playlist when they moved here?? Lots of nostalgia followed that really make up the best of the Pet Shop Boys, and most of my all-time favorites — “Suburbia,” “Being Boring,” “You Were Always On My Mind” and “Jealousy.” “It’s a Sin” wound up being the most intense and the biggest crowd pleaser, despite closing the their best known hit, “West End Girls.”

My favorite surprise was a mash-up of “Domino Dancing” and Coldplay’s “Viva la Vida.” Very cool. Neil wore a crown of course. I just love these guys, and I can’t wait to see what they do next. Check them out if you can, they’re a lot of fun! And it’s a great show. 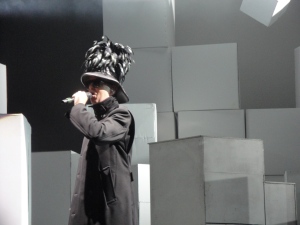 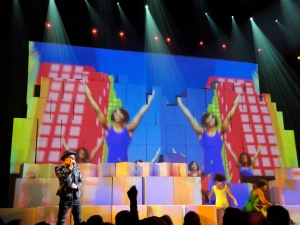