Tonight I ventured to the East Village and the Fillmore at Irving Place to catch Perez Hilton’s 2009 Tour featuring Ladyhawke (above), Frankmusik, Semi Precious Weapons and Ida Maria. Whether you like Perez Hilton or not, there’s one thing in which we agree. People who love music (like Perez) want to share their favorite music with others. That’s the concept of his show. And apparently, he and I have the same taste! 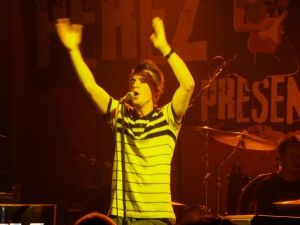 FRANKMUSIK
Opening the set was one of my favorite new artists from the U.K. – Frankmusik, the electropop phenom. Not only was this his U.S. debut performance, it was his first visit to New York. I think we’ll see him again. He played all my favorites, “Three Little Words,” “When You’re Around” and “Confusion Girl.” Frankmusik is so cool, I just want to hang with the guy… especially when he covers Rihanna’s “Please Don’t Stop the Music!” Clearly thriving on adrenaline and soaking up his debut NY performance, he closed with my favorite track, “Better Off As Two.” Wow! That was just the first act! Spotted… Frankmusik in the wings, in the crowd, outside smoking after his set ended. 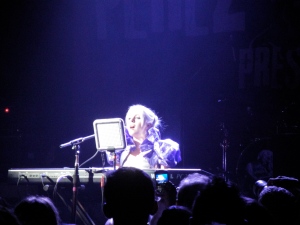 LITTLE BOOTS
After a few interstitial videos by Beyonce, Kylie and Taylor Swift (huge applause), Perez appears and announces Ida Maria, his first record contract sign-on, is under the weather (boo!), but he has a surprise for us… “she’s new in town, and she’s our remedy,” he teased. My new pint-sized diva Little Boots! (more electropop from the U.K.)! Ok, I admit, I was tipped that she would be a surprise guest. So I sold my tickets to Little Boots at Bowery Ballroom and committed to only going to Hilton’s show. Why they were scheduled on the same night is beyond me! But I digress… Sans band (who were waiting for her at Bowery Ballroom), Little Boots sits alone at the keyboards and works her signature tenori-on (a boxey Japanese electronic instrument) and plays her latest single “New in Town,” and upcoming single “Remedy,” two of my favorites. But the highlight was her beautiful cover of Kate Bush’s “Running Up That Hill,” a Hilton favorite, apparently.

While I was conflicted over which concert to commit myself to, I think I made the right decision. Little Boots shared that she will be spending a lot of time in 2010 in New York and that we’re going to get sick of her. I doubt it, but it comforted me to know that I’ll get to see her whole set soon. Check out “Not Now,” my favorite Little Boots track off her Illuminations EP on iTunes!! 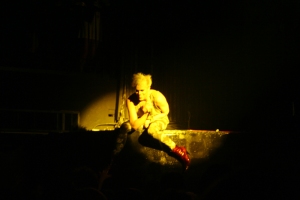 SEMI PRECIOUS WEAPONS
More interstitial videos… vintage Janet (Love Will Never Do Without You!) and Kanye, which received a loud, well-deserved round of boos. Spirits quickly lifted as Semi Precious Weapons took the stage. A true New York act in all its glory, frontman Justin Tranter oozes sex, attitude and pure unadulterated pleasure. What a breath of fresh air! I’ve seen them before and their new material is fun and fantastic. I don’t know the names of their songs, but it’s as much about their music as it is their energy. They’re about tranny glam rock ‘n roll. Hot hot hot. And, ever since I saw them perform at Lady GaGa’s CD release party last year, I’m still crushin’ on drummer Dan Crean. My camera didn’t have the zoom power necessary to do him justice so just catch them when they’re in your town!

LADYHAWKE
Ok, it’s Midnight. My friend Alex has already bolted… is he nuts?? Ladyhawke finally takes the stage and opens with one of my favorite tracks, “Magic.” Is she the second coming of Stevie Nicks?? So many times during her set that thought comes to mind. Seemingly terrified, and admittedly nervous, the humble New Zealander singer-songwriter zipped through most of the tracks off her debut album in about an hour. I was a little disappointed that she didn’t “entertain” or stray too far from her Christmas tree light bedazzled mic stand, though I forgive her for her guitar work and pitch-perfect vocal delivery. The entire set was a crescendo to her best-known and most infectious songs, “Paris is Burning” and “Back of the Van” (so Stevie Nicks, btw). But she saved the best for last, “My Delirium,” which drew members of Semi Precious Weapons back on stage to dance and cry, “STOP! playing with my delirium!” I can’t stop. She’s brilliant. Catch her if you can.

So to sum it up from this music lover to another, thank you Mr. Hilton, for sharing! 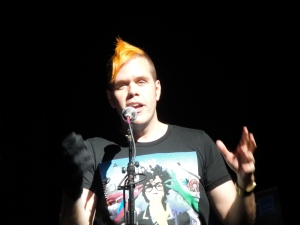