Tonight I was at one of my favorite music venues, Highline Ballroom in Chelsea, to see Victoria Christina Hesketh.  Better known as Little Boots, the evening marked the U.S. release of her debut album, Hands, which was released in the U.K. almost a year ago.  I immediately like anyone who draws inspiration for their name from the Roman Emperor Caligula, meaning “little soldier’s boot.”  Hesketh herself apparently has very small feet.  Hence, Little Boots.

A wonderful pop music discovery in 2009, Little Boots finally has her sights on conquering the U.S. as she kicks off her North America tour soon with another favorite of mine, Dragonette.  She graces the stage toward the back, wearing a sunglasses and black, shiny hooded robe, and sits at her keyboards and performs a relatively somber opening number, “Ghost.”  I overhear the people behind me say, “so GaGa!”  But she quickly drops the hood/robe combo and GaGa comparisons go out the window.  She dawns a really cute, super short gold lame dress and sings her hit, “New In Town.”  I’m right up close and I get a look  at her amazing shoes… I mean come on, one would expect amazing footwear when you call yourself Little Boots. 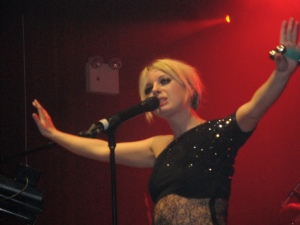 For the next hour, Little Boots covers most of the new material off Hands including “Symmetry,” “Meddle,” and the beautiful “Hearts Collide.”  The mega highlight for me was “Earthquake,” when Little Boots debuted her brand new “laser harp.”  Sooooo cool!  Other highlights included her closing song, “Remedy,” my personal fave off Hands, and an encore of “Stuck On Repeat,” both a stripped down acoustic version, and then full throttle.  The only songs I didn’t get to hear was “Not Now” and the Freddy Mercury-penned “Love Kills,” off her Illuminations EP.   “Love Kills” isn’t even on Hands.  Why??

I guess it doesn’t matter.  They’re all on iTunes now.  Catch Little Boots and Dragonette across the U.S. and Canada in the coming months.  She’s fantastic, a lot of fun and cute as can be.  I heart Little Boots!