Two months ago I was at Le Poisson Rouge in the West Village to see Marina & The Diamonds when my best gal pal Adrienne raced over and shouted, “Sia’s here!”  Cut to us scouring the whole venue to make an introduction and gush about our mutual love for Marina.  We never found her.  So this time, we paid and got in line early to see Sia Kate Isobelle Furler, known as just Sia.

The Adelaide, Australia-born jazz-soul-pop singer songwriter is regularly seen around town haunting music venues like yours truly.  Tonight she played Terminal 5 to promote the upcoming release of her fifth studio album, We Are Born.  While I’m a big fan of “You’ve Changed,” which was first posted on the SheenaBeaston music blog (one of my faves, see right), it’s her first official single off We Are Born, “Clap Your Hands,” that has me so excited to see her show.  I’m a firm believer that the most talented and gifted artists follow the beat of a different drummer.  Sia definitely meets this criteria.  Her video is wildly insane, weird and a total trip.  I love it.  BTW, I’m a fan of the pink hardhat and handlebar mustache.  Check it out:

A miss-mash of stripes, quilts and braided rugs with “Sia” spelled out in flowers make up the backdrop tapestry of her set.  And the stage floor was covered in stripes too.  I love a good concept and theme!  Her band enters the stage, all wearing stripes, and Sia emerges wearing a red and white striped “candy cane” dress that appeared to be made of strips of plastic garbage bags.  A wind machine was placed behind her to catch some of the strip features in the space around her head.  It was actually quite visually stimulating, and on par for her quirky style and personality.

What I found most fascinating about Sia was this:  She is an incredibly talented performer who loses herself in almost every song by closing her eyes and allowing the soul within her take over and unleash that gorgeous voice that ranges from crackling, aching and vulnerable, to bold, brash and powerful.  It’s liberating to watch her come in and out of these trances.  To just let yourself go with a couple thousand people watching you is amazing.  When she comes out of a song, she’s a totally different person.  Her big, silly grin that’s so cute.  A high-pitched giggly Australian accent that’s so charming.  And she knows how to work a room by flirting, teasing her groupies, seeking out presents from the audience, and egging on hecklers to engage with her.  So refreshing and entertaining.

My favorite performances were the upbeat “You’ve Changed,” “Bring Night” and “Clap Your Hands” off her new album.  I love her for covering Madonna’s “Oh Father” so beautifully.  But it was “Clouds” that really impressed me.  After singing it, she said it was her favorite song to sing (right now).  Other highlights included more subdued songs off previous albums including “Buttons,” “Lentil” and her best-known song, “Breathe Me.”

I have a feeling Sia is going to propel herself to another level with this record and tour.  And good for her.  She’s not your typical pop star.  She’s 34-years-old, weird as hell, but beautiful, charming and honest.  What more can you ask for? 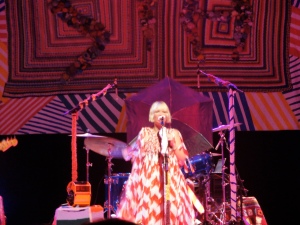