Does it get any better than this?  Two remarkable artists promoting two of the summer’s best records, performing two nights in New York at two of the city’s best live music venues, Music Hall of Williamsburg and Webster Hall.  Finally, Swedish pop songstress Robyn and American R&B diva Kelis are here, co-headlining their All Hearts Tour.  The genesis of the tour (or clever marketing ploy) occurred on Twitter between our leading ladies back in the Spring.  Apparently, it went down like this:

So let’s bring it… the strobes, the dancing shoes, the star dust and acid rain… I’m ready. The first show is in Brooklyn at the Music Hall of Williamsburg.  I love this venue.  My first time here and it’s on par with my other favorite haunt, Bowery Ballroom.  Small, intimate, and I perched myself on the left-side riser for a perfect viewing experience.  I thought the crowd would be an interesting cross-section of urban hipsters and gays + the girls who love them.  I was right, but as the night progressed, gays ruled.  It felt like home.

I got to see Kelis earlier this Spring at Santos Party House, the first gig to support her stellar new record, Flesh Tone.  Then, I didn’t know all the new songs, but now I know them by heart.  All my friends are obsessed with this record too.  Since her breakthrough in 2002, she’s come a long way.  She’s still got that milkshake thing going on, but its her velvet voice that seduces me.  It’s so lush, rich and empowering.  No one else sounds like her.  And wow, is she a beautiful, beautiful woman.

Finally, the show gets going with Kelis taking the stage behind her signature lit-up disco stick mic stand, fierce gold wig and a slightly ill-fitted dress that she kept pulling up all night.  At one point, some queen asked her to take off her wig.  She replied in her husky voice, “never bitch.”  She opened with the bouncy and lyrically repetitive “Emancipate” off Flesh Tone.  Then she shimmied and shook her way into the awesome “Scream.”  From there, it became a Kelis mega-mix of her earlier work including her best known song, “Milkshake,” mashed up with Madonna’s “Holiday.”  I liked that she threw into the mix old school samples of other artists like Annie Lennox’s “Sweet Dreams” and Salt n Pepa’s “Push It.”  But it’s her new stuff that really turned me out.  Her new single, “4th of July” was the biggest crowd pleaser of her set (check out her hot video below).  Other highlights included “22nd Century,” my favorite song “Brave” and her closer “Acapella,” all off Flesh Tone.

Despite the fact that the gorgeous Heidi Klum was spotted on the balcony dancing with a beer during Kelis’ set, I’m confused how this became a co-headliner tour.  I like Kelis, she was good.  But it soon became clear that the crowd turned out for one thing, and one thing only:  Robyn.  Some said Kelis bored and Robyn soared.  I wouldn’t go that far, but Robyn took the night to a whole new level.

I periodically go in and out of Robyn Robsessyons whenever she releases new music.  This week, I’m on an upswing with the YouTube release of her new single, “Hang With Me” (see video below).  What I love about Robyn is how real and authentic she is.  Never overproduced.  The video invites you to hang with her while she’s on the road and get a glimpse into her life.  My favorite part is the little kid with the sucker who waves at her in the diner.  Watch it.  I promise you’ll smile.  Such a simple, smart and effective concept.  Call me Priscilla, but it just makes me want to get on that tour bus and hang with her the whole way to Alice Springs.

I first saw Robyn live in 2008 at the Manhattan Center on 34th Street, when she was promoting her self-titled album Robyn.  She blew me away and I’ve been eagerly waiting two+ years to see her again.  On top of that, it’s been more than five years since she dropped any new material at all (the self-titled Robyn was originally release in Europe way back in 2005, and in the U.S. in 2008.  Can you believe that?).  With all that time on her hands, she’s amassed a library of songs big enough to release a suite of three EPs in 2010.  The first, Body Talk Part 1 was out in June.  Part 2 will be available in September.  Part 3 will be out at the end of the year.

Finally, around 10:30, the Swedish pixie chick entered the stage following a dramatic prelude.  To stick with our theme of pairs, her band consisted of two drummers and two keyboardists.  Pretty much amazing.  She opened with “Fembot” and “Cry When You Get Older” off Body Talk Part 1.  But the biggest hit of the night was her brilliant summer jam “Dancing On My Own.”  Personally, this song has meant a lot to me this summer, for many reasons.  To sing at the top of my lungs with the crowd’s energy insanely in overdrive, this moment by far was the climax of the night.  “I’m in the corner. Watching you kiss her.  Oooohhhhhhh!!!” Her energetic dancing on stage is so riveting.  She can’t stop dancing.  I can’t keep my eyes off her.  She is so special and has that x-factor you can’t pinpoint.  I want to know what’s at the source of her soul.  It’s beautiful.

I spotted one of my favorite music bloggers, Sheena Beaston, right up front with a big ‘ole camera in Robyn’s face most of the night.  I can’t wait to read her post!  But back to Robyn.  She covered a number of songs from her last record including “Cobrastyle,” “Who’s That Girl?” and one of my favorites, “Be Mine.”  I’ve heard her sing this song as a ballad before, but I much prefer the dance version.  It’s hot!   Back to the Body Talk, she commanded the Williamsburg dancehall with the tongue-in-cheek, “Dancehall Queen,” before giving her vocals a rest during the spastic dance interlude “Don’t Fucking Tell Me What To Do.”  It’s a song about all the vices that are killing her, and her plea for others to respect her and (follow the title).  Such a smart girl.

For the encore, Robyn invites Kelis back out on the stage and together they banter and sing each others’ songs.  I can’t even remember what the songs were.  But Kelis did lose the gold wig for the encore.  Robyn then slowed it down with the only ballad of the night, a beautiful, heart-felt version of her late ’90s hit, “Show Me Love.”  She closed with my favorite song off Robyn, “Dream On” and her monster 2008 hit “Every Heartbeat.”  My only disappointment was that she didn’t sing “Hang With Me.”  Weird since it’s her new single.  At the end of the night, it was clear that Robyn rules the roost.  I have one week to rest my vocals before I get to see her again at Webster Hall.  Be there! 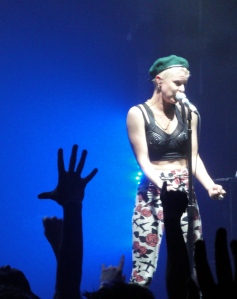 Update: So the week went by and my second engagement with Robyn and Kelis finally arrived.  My buddy Joey went to the show the night before and warned me it was a HOT muggy mess in Webster Hall, so I dressed accordingly.  Again, both artists commanded the room but once again, Robyn ruled.  Here’s the deal:  I heard the night before, the show got going later than Thursday night, with Robyn closing around Midnight.  On Thursday, we were out by 10 p.m.  Apparently there was a dance party they had the clear the venue out for.  So not only did it not go late, both Kelis and Robyn shortened their sets, nor did they perform together.  I’m jealous Robyn debuted “Hang With Me” on Wednesday night, but didn’t perform it Thursday.  Also missing was “Show Me Love.”  Had I not seen the show the week before, I would still call Thursday night’s show one of the best concerts of the year… despite the sauna-like heat in the room.  I expect big things from Robyn and hope she’ll be back soon to promote Parts 2 and 3 of the Body Talk series.  So the Robsessyon continues…