Is Janelle Monae‘s star shooting into hyperspace?  I think so.  Last night the Kansas City-bred, Atlanta-residing afro-punk songstress performed the first of two shows at Terminal 5, opening for fellow Georgians, Of Montreal.  But seeing Janelle was the main event for me.  This was my third time seeing her live.  The first two years ago when she released Metropolis: The Chase Suite, and again this past March when she released her follow-up, The ArchAndroid.

The half-packed hall (but jam-packed up front) was full of young hipsters and urban elite.  While I suspect most of those hipster kids were there to see Of Montreal, everyone got into the powerful performance of Ms. Monae.  The evening’s mood was set as the opening chords of “Dance or Die” began to play.  Janelle appeared in a black grim reaper robe with two back-up vocalists.  Tensions rose until she dropped the robe and sang “Oh these dreams are forever.  And if you wanna wake the sun, just keep on marching to the drums.  These dreams are forever.”

She’s in her signature black tuxedo pants and perfectly fitted white blouse with puffy shoulders, ruffled collar, and her famous ‘do.  In two years, I have never seen her wear anything else or styled in any other way.  Do you think she has other clothes?  Can’t blame a girl for sticking with a concept.  Like her record, the first two songs blend into the other, so Janelle kept on going straight into “Faster,” and then “Locked Inside.” 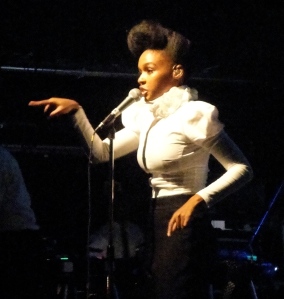 God blessed Janelle with some powerful lungs.  To sing like that, dance like that, move like that, keep your breath and pitch?  Impressive.  To take a breather from her tour de force entrance, Janelle slowed it down with her gorgeous interpretation of Charlie Chaplin’s “Smile.”  Simply breathtaking.  Her vocals are so rich and pure, I can’t get enough of it.

Other highlights included my favorite song off her debut EP, “Sincerely Jane,” featuring the infrequently used french horn.  “Wondaland,” my favorite off The ArchAndroid was also performed.  But the night crescendoed with her important anthem “Cold War,” in which her back up dancers and singers appeared in black robes and strange masks.  Through the course of the song, Janelle knocked them off one by one, while video footage of Luke Skywalter and Darth Vader in a light saber duel hovered overhead.  So weird yet brilliant at the same time.

“Tightrope” put the patrons of Terminal 5 into a frenzy, with Janelle squirming around the floor of the stage like she was possessed.  She’s so unlike any performer I’ve ever seen — and remember, she was billed as the opening act.  Yes, her star is certainly rising.  Everyone in the room knew her songs and were singing and dancing along.  She ended her set with one encore, “Violet Stars Happy Hunting!” in which she moved into the crowd to get closer to her fans.  And I’m not just talking about the front row.  Her android army of body guards cut a path for her to make her way to the middle of Terminal 5, right under that massive disco ball.  Insanity, but go for it girl.  Eventually she made her way back to the stage and that was it.  I hope, I wish, I pray that her star continues to shoot into the heavens.  We need artists like her to defy our lowest common expectations of our pop stars and surprise us with the talent, vision and gift that is her voice.  Smile.