My affection for Mark Ronson has been dormant, clearly.  I knew he made a name for himself as a DJ back in the ’90s, and more recently as one of the music industry’s most sought after producers (Amy Winehouse, Lily Allen, et al), but recording artist?  He’s sort of becoming the Oprah of the music biz.  Careers are made if you work with him.  Monday night I got to take it all in, much to my surprise and delight, as he and his team of collaborators, the Business Int’l., played the Music Hall of Williamsburg.  After seeing this show, dormancy became an awakening.

His set reminded me of Miike Snow’s, which I just saw last week.  Lots of chrome keyboards and hexagon shaped drums.  Oh, the ’80s.  Ronson, sporting a platinum blond look, took to the stage about a quarter after 10 with the instrumental “Circuit Breaker,” off his brand new album, Record Collection.  His style defies category as he’s drawn to rap, R&B, jazz and just good clean pop.  Ronson shared with the crowd that he and the team on stage had recorded the new record just six blocks from the venue. 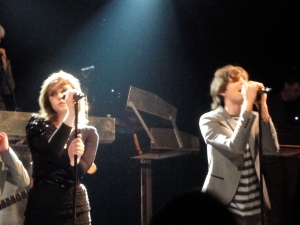 I didn’t know his music well, particularly the new stuff, until after the show.  But standouts included The OC theme song “California” and “Lose It (In The End),” featuring the mega-cute Alex Greenwald of Phantom Planet.  This guy is really cool, and very talented.  Great vocals and an accomplished musician as well.  I also loved anything that featured the English rose of a singer that is Rose Elinor Dougall of the Pipettes.  Her vocals on “Hey Boy,” “The Night Last Night” and “Oh My God,” recorded by Lily Allen on Ronson’s last album, was inspiring.  Her vocals reminded me of Sophie Ellis-Bextor mashed up with Allen, and looked like Thora Birch.  British Beauty, anyone?

Another surprise was “Bang Bang Bang,” the first single off Record Collection, featuring Q-Tip and MNDR (aka Amanda Werner), who I saw open for Kate Nash back in the Spring.  This chick is fascinating.  Sort of odd and awkward with her big glasses, no-fuss ponytail, ill-fitting leotard, she does not look like a pop star, but she’s fearless.  I’m happy to see her hit her stride with Ronson, who co-wrote the lead single with her.  Ronson closed the night with his next single, “The Bike Song,” again featuring my crush Mr. Greenwald on vocals.  I got home around 12:30 a.m., turned on the telly and there was Ronson and MNDR on Letterman!  They must have taped it earlier that day, which btw, is next door to my office in Manhattan.  Living in New York City truly is a surreal life. 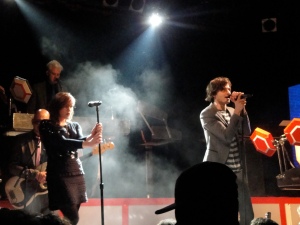