Howling, coffins, girls with only one eye, and rabbit hearts consumed my Monday and Tuesday nights this week.  Following a long, exhausting Halloween weekend of terror and debauchery, it seemed only appropriate to cap the weekend with two nights of the glorious Florence & The Machine at New York’s Terminal 5.  On the first night, she appeared wearing a Stevie Nicks-inspired flowing dress with cape — perfect for twirling — even though it made her look like a Druid princess.  The second night a tight, bedazzled onesy with cape (of course).  Apparently someone in the audience designed it for her in a contest.  Let’s see if she shows up on Project Runway next season!   Still, her spellbinding vocals, coupled with her witchy wardrobe, sort of made it all work.  As she did when I saw her back in the Spring, she opened with “Howl.”

When I saw her in the Spring, I’ll admit I was a bit disappointed with her vocal performance.  It was pitchy and I worried she was one of those artists who shine only in a studio.  I’m pleased to report that it’s not the case.  Her vocals were either well rested, and/or she’s matured as an artist — working on her control, improving her stage presence, connecting with the audience — she’s come a long way.  “Drumming Song” and “My Boy Builds Coffins” were next on her set list and performed to perfection.  But I loved, loved, loved the bluesy, creepy “Girl With One Eye.”  Its just good, plain, fun, dirty, filthy, lesbian fantasia.   “I said, hey, girl with one eye.  Get your filthy fingers out of my pie.  I said, hey, girl with one eye.  I’ll cut your little heart out because you made me cry.”   Oh my God, I love her.

Up next was one of my favorite songs off her debut album Lungs, “Cosmic Love.”  Amazing song and she sings it so beautifully and powerfully.  But the big torch song of the night was “Blinding.”  I have not listened to this song as much as her others, but this performance blew me away — both nights.  The chorus was brilliantly emphasized with a flood of strobe lights juxtaposed to her haunting vocals “no more dreaming like a girl so in love in the wrong world.”  At the bridge, Florence unleashed everything she’s got with screaming howls with her arms spread wide open, and strobe lights cutting through her cape and red locks.  It seemed to go on forever.  I was at church for the time she performed this song.  Amazing.

On the second night, a guy standing near my friend Currey in the back of Terminal 5 — who he described as a lumberjack fresh off the bus from Oregon — let out a huge roar for Florence on the opening notes to “I’m Not Calling You a Liar,” and it got her.  She smiled, looked up and tried her hardest to pull it together.  Currey said “he loves him a Florence ballad.”  And don’t we all?  She went on to a pitch-perfect delivery of “I’m Not Calling You a Liar,” and my other favorite song of her’s, “Between Two Lungs.”  Check it out:

Here’s another reason to love Florence:  She switched it up quite a bit from the first night to the second.  Not only did she kick things off with different songs, she swapped a few in and out.  On the first night, I got to hear her perform “You’ve Got The Love,” and the second night, “Hurricane Drunk.”  I suppose with a relatively small library of songs to pull from, you have to do something to mix it up so you don’t become a robot — or in her case, a zombie.  But she did perform a couple of new songs, including one off her forthcoming sophomore record called “Strangeness and Charm.”  I won’t be called a liar.  This one will have to grow on me.  She also performed “Heavy In Your Arms,” which I liked a lot better, off The Twilight Saga: Eclipse soundtrack.  This is truly a beautiful song.

She closed her main set with “Rabbit Heart (Raise It Up)” on both nights, encouraging everyone to raise their arms every time she said “raise it up.”   “Kiss With a Fist” is such an awesome, punky song.  I was worried she wasn’t going to perform it, but she did, right before her harpist clicked way with the opening chords to “Dog Days Are Over.”  I predicted this song was a contender for song of the summer.  I was way off, but just by a season.  Her VMAs showcase, and performances on Ellen and Dancing with the Stars, put her howling Lungs album into the Billboard Top 4o albums chart for the first time since she released the record back in 2009.  Look out for her again soon.  She’s already coming back to New York in November to play Saturday Night Live, and again in December to play Irving Plaza (anyone have an extra ticket?).  You Go Flo. 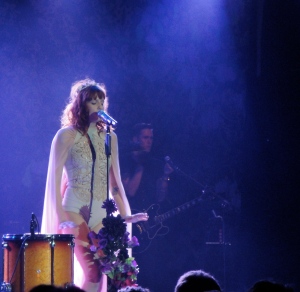