In January my long-time friend Kelly suggested we rendez-vous in Las Vegas to catch Lady Gaga and the Scissor Sisters at the MGM Grand.  How could I resist?  And Vegaga Weekend was hatched.  Appropriately, we stayed at the Hard Rock Hotel a few blocks off the Las Vegas strip chock full of nostalgia and memorabilia.  It was perfect.  Needless to say, what happened in Vegas is about to be shared…

A few drinks and one pitcher of margaritas at the Pink Taco later, we arrived to catch the Sisters.  Schmaltzy as ever, they opened with “Nightwork,” the title track off their 2010 album and “Any Which Way” featuring flamboyant frontman Jake Shears’ signature falsetto.  Before they delved into their earlier work, I was surprised to see how unaffected the crowd was around me.  Sure, they were there for Gaga, but I thought opening for her would boost their notariety in the U.S.  Ana Matronic gets it.  She said, “unless you’re gay or British, you probably don’t know who we are.”  Still, they did a great job getting the crowd warmed up with “Take Your Mama,” “I Don’t Feel Like Dancing” and closer “Filthy/Gorgeous.”

Finally, the main event.  Lady Gaga appeared just as she did last summer at Madison Square Garden.  Fierce as hell behind a veiled stage singing “Dance in the Dark.”  While this was the Monster Ball, an extention of her 2010 tour, it felt like a completely different experience.  This time, I’m on the floor, up close and personal — the way every concert should be experienced.

For my Monster Ball review and healthy comparison of Gaga’s rise to fame monsterdome to Madonna’s, read my review from last summer.  It still stands and it begins to preview her next move — a little record called Born This Way.  She herself proclaims it to be her Thriller.  Ballsy statement, but would you expect anything less?  Based on the two tracks released, the title track and the Elton John-esque love song “You and I,” I think she’s probably right.  My favorite moments of the night were these two songs.  I captured “You and I” on video, so check it out.

As for the song “Born This Way,” I’m not jumping on the hater bandwagon of Gaga ripping off Madge’s “Express Yourself.”  In fact, it underscores my point of view that Madonna’s message was that of expressing oneself, while Gaga’s message has been about being yourself.  Is she inspired by Madonna?  I should hope so.  And when she appeared for her final encore in that latex dress, it was evident the song may be her “Like a Prayer.”   The audience went mad. 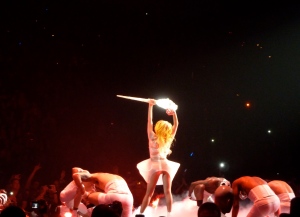 After the concert, Kelly and I hopped in a cab and headed over to the Bellagio to hit Fergie‘s birthday party at The Bank.  I know — she was paid to show up (with hubby Josh btw) because operators of the competitive club market in Vegas need the buzz to drive foot traffic, but dammit it was fun.  Fergie thanked the crowd for helping her celebrate and then stormed the deejay booth and sang over the tracks to the Black Eyed Peas’ “I Gotta Feeling” and David Guetta’s “Gettin’ Over You.”  She looked amazing and I’m gaga for the unicorn cake.  What a great, unforgettable night in Sin City.