I find myself somewhere between a trip to Sweden for work and trip to Indio, Calif., for the 2011 Coachella Festival at a k.d. lang concert.  It’s so appropriate because I’ve always felt k.d. lang fell somewhere between lonesome vulnerability, hopeful aching for love and undeniable self-confidence.  She also comes across as not totally comfortable in her own skin.  During the show she even said she looks like a moose.  I totally get her.  Sing It Loud is lang’s new album with her band she calls Siss Boom Bang.  One of the finest vocalists alive in my opinion, k.d. lang played a small, initimate showcase of her new record to just a couple hundred people at Le Poisson Rouge.  As usual, I was immediately cast under her spell with her silky smooth voice and new set of songs that sound like they fall between her 1989 country classic Absolute Torch and Twang and her 1992 break-out pop gem Ingenue.

Right on time, lang opened her set with the latest single, “I Confess,” and I confess I’m obsessed.  “I confess I need you badly.  Hold me in your arms, love me madly.  I confess, I’ll be your daddy.  Ask for anything and I’ll do it gladly.”  k.d., the audacity!  Enter pounding guitar strums to lang’s pitch-perfect voice.  Incredible.  What’s more incredible?  The video.  Check it out.  lang stums that guitar of her’s on the stage of a strip club with girls dancing all around her.  “I confess, I’ll be your daddy,” she coos.  I love her.

She followed that with a cover of the Little River Band classic, “Reminising.”  Other favorites included the beautiful “Water’s Edge,” I don’t want to fight, I just want to get it right “Perfect Word,” and “Sing It Loud,” about finding your voice so everyone knows you are.  “Heaven” and “Inglewood” were also stand-outs.   But she saved the best for last.  “Sugar Buzz” is her new bluesy torch song.  She hit some notes at the end that made my friend and I just stop, drop our jaws and look at one another in amazement.  This woman’s vocal instrument is in top form and its simply one of a kind. 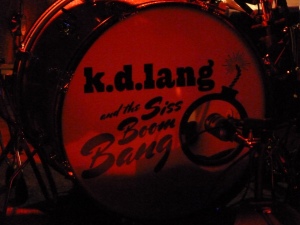