I missed 23-year-old Eliza Doolittle at Coachella this year because her set time was too early:  Noon.  I wonder how many people were there to see her at at that hour?  I didn’t fret about missing her because I knew I was going to see her perform at Mercury Lounge on E. Houston Street in New York a week later.  Doolittle, who’s real name is Eliza Sophie Caird, is a British singer-songwriter who hit the UK charts last year with hits like “Skinny Genes” and “Pack Up.”

Her stage name is inspired by Audrey Hepburn’s signature role in My Fair Lady which was Eliza’s nickname as a child.  Not surprising.  She comes from a long line of theater buffs including her father who’s an associate director of the Royal Shakespeare Theatre and her mother is Frances Ruffelle, the musical theater actress who originated the role of Eponine in the first English production of Les Miserables.  And, she won the Tony for it. 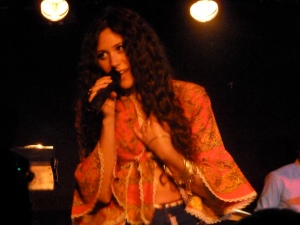 Doolittle took me by surprise.  She’s one of those artists who’s better live than recorded.  Quirky, cute and confident.  I loved her.  Her voice on songs like “Rollerblades,” “Nobody” and “Skinny Genes” was so pure and crisp.  Even listening to her album the next day, I’m still longing to hear her live again.  She also covered Bruno Mars’ “Grenade” and it was perfect.  She closed with her biggest hit to date, “Pack Up” and returned with a two-song encore including “Mr. Medicine.”  She sure had my prescription for a hazy, misty Monday night in New York.