Thirty years ago five punk girls from LA made history with the release of their debut album, Beauty and the Beat.  Immaturity, insecurity, jealousy, infighting and rampant drug use eventually led to the group’s demise, but The Go-Go’s go down in history as one of the most successful all-girl bands and one of my all-time favorites.  Beauty and the Beat captured what the ’80s promised — Lust, love, excess and a helluva great time.  I still remember singing “We Got The Beat” on the playground at Graden Elementary and reminding everyone in the school that “This Town” is our town.

This is my third Go-Go’s concert and my first to see them in New York.  It’s appropriate they’re here to celebrate Beauty and the Beat because it was recorded here, and they stayed at the Wellington Hotel on 7th Avenue during that time.  In fact, guitarist and keyboardist Charlotte Caffey shared it was there they famously donned towels and cold cream as a cheap wardrobe solution for the album’s cover shot.  If the Wellington’s bathroom walls could talk. 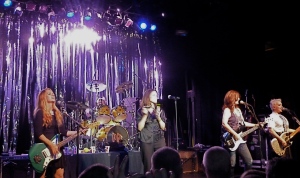 Around 9:30, the ladies took to the stage opening with their hit “Vacation,” and title track of their sophomore record.  But the night was dedicated to Beauty and the Beat and most of the songs played were off that legendary album.  “How Much More,” “Tonite,” “Skidmarks on My Heart,” and my two favorites “Lust to Love” and “This Town” were all played like they were still 22 years old.  Commercial stand-outs “We Got the Beat” and “Our Lips Are Sealed” got everyone dancing, but I loved that they played “Automatic,” the slowest song on the album, and a song that the girls rarely play.

From their other albums, they played “Get Up And Go” off Vacation, “The Whole World Lost Its Head” off Return to the Valley of the Go-Go’s in 1994, and “Unforgiven” off God Bless the Go-Go’s in 2001.  The latter was written by Green Day front man Billy Joe Armstrong back in the day when the Go-Go’s toured with them.  In Belinda’s 2010 memoir (yes, I read it), the Green Day guys said they were out-partied by the Go-Go’s.

In the surprise of the night, they performed Belinda Carlisle’s first hit from her solo career, “Mad About You.”  Given all the jealousy Jane had toward Belinda, I’m surprised she let her sing it.  After all, despite cries from the audience, they didn’t play Jane’s “Rush Hour.” Though having read Belinda’s memoir, I know that song was supposed to have been the G0-Go’s first single off their never-recorded fourth album after Talk Show.  Instead, the Charlotte Caffey-penned hit launched Belinda’s solo career.  It’s good to see that they’re all friends again.  In fact, my girlfriend Rachel informed me that Belinda took Jane to her first Kundalini class at Golden Bridge Yoga in SoHo on Thursday.  I love it.

For their first encore, they played “Beatnik Beach” off Vacation and then “Head Over Heels” off Talk Show.  For the second encore, Jane introduced it by saying “I was a perv before being a perv was cool.”  Not found on any Go-Go’s recorded album, you can find a live recording of the S&M-inspired “Fun With Ropes” on Return to the Valley of the Go-Go’s.  Rihanna should be so jealous.

In the end, I’m still in love with the Go-Go’s, even after 30 years.  Despite all the drama each girl has endured over those three decades, there’s an undeniable chemistry when the five of them play together.  It’s magic.  Belinda’s still gorgeous.  Jane’s still an insane punkster.  Bassist Kathy Valentine is still rock star cool, and super-hot.  Charlotte is still the musical genius and glue that keeps it together.  And drummer Gina Schock is still a bad-ass.  “Gina! Gina!” chants endured as she introduced her band-mates, and her mom who was in the VIP section.  God Bless the Go-Go’s.