Talk about a spectactular weekend.  It’s Friday night of Gay Pride weekend in New York City and the spectacular Florence & The Machine is set to play SummerStage in Central Park.  It’s been raining in the city, and spooky clouds hover low and swallow up the tops of skyscrapers surrounding the park.  Could the scene be more perfect for Florence?  She sneaks on stage behind a giant curtain that drops as soon as the opening notes to “My Boy Builds Coffins” begin to play.  She looked fantastic wearing an emerald green dress that billowed in the wind of the night. 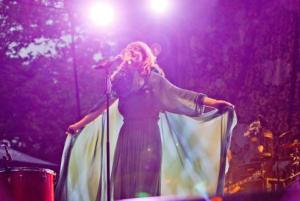 Prancing across the stage and twirling as if she’s the second coming of Stevie Nicks, Florence soared through most of her debut album Lungs, now two years old or more, and a few new tracks off her sophomore album.  Highlights included a stripped down “I’m Not Calling You a Liar,” “Between Two Lungs,” “Drumming Song,” “Cosmic Love,” “Hurricane Drunk,” “You’ve Got the Love” and her encore “Dog Days Are Over.”  But my favorite moment was her opening the intense “Blinding” by sampling Lady Gaga’s “Judas.”  “I’m in love with Judas.  I’m in love with Judas,” she teased. 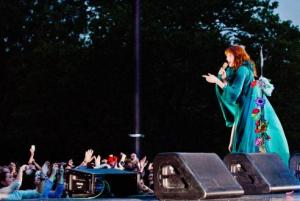 As the concert closed, thousands scattered in all directions of Central Park.  As we walked closer to the edge of the park, rumblings of a legislative passage begin to surface.  It has happened.  The New York state senate (finally) made gay marriage legal in the Empire State, granting same-sex couples equal rights and benefits enjoyed by straight couples.  It was a euphoric moment, walking around Lincoln Center, in what seemed like everyone in the city had a smile on his or her face.  A proud moment indeed. 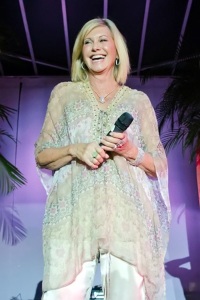 The next day, I went with a friend to the Bondi Beach party on Governor’s Island.  It was pretty much a circuit party and not my scene, but the beach on Governor’s Island in New York Harbor is amazing, especially when the sun sets over New Jersey.  But the real reason I went was to see Olivia Newton-John perform.  I’ll admit it, the first cassette tape I ever bought with my own money was her Greatest Hits Vol. II.  I still have it, I just don’t have a tape player anymore.  I got up to the front of the stage with no obstructive view to see the icon who preceded Madonna.  She performed three songs:  “Xanadu” and “Physical” and to set up her closer, she referenced the legalization of gay marriage in New York, congratulated us and exclaimed it’s truly “Magic.”  You have to believe it’s magic.  Perfect exclamation point to an exciting and emotional weekend.