Un, deux, trois times I have seen Yelle this year.  First at Coachella, second in New York, and now at El Teatro Colegiales in Buenos Aires.  The Argentine love their Yelle, especially the French band’s frontwoman, the sleek, slender siren Julie Budet.  She’s beautiful and always reminds me of Martina Sorbara of Dragonette.  They must be twins separated at birth and by country, France and Canada, respectively.

They opened with “S’éteint Le Soleil” and the Robyn cover, “Qui Est Cette Fille?” (Who’s That Girl?).  The latter song earned Yelle a fan in me immediately at Coachella.  I have no clue what they’re singing about, but I love their sound.  “Unillusion” was next followed by “J’ai Bu” and their latest single, “Comme Un Enfant.”  Check out their brand new video.  So pink, pleasing, perfect.  So Yelle.

The Argentine fans are intensely into Yelle and it’s pretty exciting.  I was at this club in February when I visited Buenos Aires and I loved it then.  I love it even more now, even with all the damn smokers.  A true concert pro, I avoided the line but still wound up in the front row, on the right side.  The vantage point was precise, and the energy was palpable.  I used to think New Yorkers were the best audiences, but bands have to love playing Buenos Aires.  It was such a fantastic experience to see Yelle here.  I love them even more now.  On with the show, “Ce Jeu” was next, then “La Musique.”  I love the song “Mon Pays,” which sounds so electro-lush and “Chimie Physique.”  The best came last as they performed my favorite song, “Que Veux-Tu,” but in the Madeon extended mix version.  So sexy.  I can’t help but make a heart with my hands like Yelle does to express their love and appreciation.  They closed with their international hit, “Safari Disco Club,” also the title of their current album.  For their encore, they played stuff from their first album as well as “Cooler Couler,” a Crookers cover.    I see Yelle again this week in New York City.  Dying, I can’t wait. 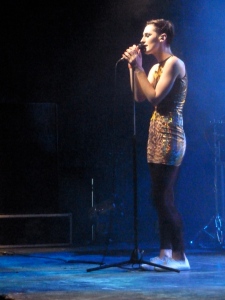