Lesson learned at this year’s Coachella: get out there early.  Sure it’s easier to act when its 70 degree weather versus 100, but it’s a travesty about the music you miss when you come out late.  I got to the fairgrounds at 1 p.m. Saturday to see my beloved Dragonette.  Context:  on the Monday before Coachella my fabulous and beautiful friend Marianne invited me to SoHo House to see Dan, Joel and Martina perform, but it was an awkward set.  I ran into Martina before the show and she was worried it was going to like dinner theater.  I told her, “it’s SoHo House.  Everyone’s cool.  Don’t worry.  You’ll be great.”  And of course, they were.  But the setting was all wrong.   Cut to Coachella.

My friend Currey gave me permission to jump out of the car in the parking lot and sprint (with a bad ankle) to the Mojave tent to see Dragonette‘s debut at Coachella.  Parking was a bitch on Saturday.  I missed “Hello” but got there just in time to hear my favorite new tracks, “Live In This City” and “My Legs Go Out Late.”  This was Dragonette’s crowd.  Jumping, dancing, arms flailing.  Yes, the crowd’s response from this outstanding and painfully underrated band put a grin on Joel, Dan and Martina’s face the entire set.  I was so happy for them.  “Pick Up the Phone,” “Fire In Your New Shoes,” “Fixin’ to Thrill” and new single, “Let It Go” were all big crowd pleasers.  I even got my own self-gratification as Martina spotted me in the crowd, mimicked my arm waves and gave me a big smile.  They were the buzz of the festival all day Saturday.

Currey suggested we check out American rapper Azealia Banks at the Gobi tent before The Big Pink.  Wow.  This girl meant bid-ness with her pink weave, “can’t miss me” black and white stripes, and matching back-up dancers.  The Harlem native was making her first appearance at Coachella and she threw down the gauntlet early with her breakthrough hit “212.”  But it was her power vocals not rapping prowess that stopped me in my tracks.  Just sampling a few verses from Amy Winehouse’s “Valerie” made me lust for more.  Beautiful.   While a gifted rapper she is, it’s remarkable she’s not marketing that voice more.  Will be interesting to see if she does.

One of the acts I was most excited to see coming into the festival was The Big Pink from the U.K.  Comprised of guitarist and vocalist Robbie Furze and synth/keyboardist Milo Cordell, their music is described as electro-rock, but seeing them for the first time, it felt more rock than electro, but I loved it nonetheless.  Opening with “Stay Gold” from their new album Future This, it seemed they were a little uncomfortable on stage.  They pulled big black curtains at the back of the stage to make it feel more like a dark club, and Mr. Furze performing mid-afternoon seemed like a fish out of water, in a dry, dry desert.  But they pulled through.  “Jump Music,” “Velvet” and their latest single, “Hit the Ground (Superman) got them into their groove as well as the crowd.

But it was drummer Victoria Smith who stole the show.  She was like a zombie drummer who would come in and out of a still-faced coma to grimace at their “suck my discotheque” t-shirt-wearing roadie or to kill a drum solo.  I was sort of obsessed with her.  I discovered she used to play drums for a band called Ipso Facto, described as a goth-inflected, melodramatic psychedelic rock band.  Yep, that sealed the deal.  I love her, and her mad drumming talent.  Can’t wait to see them again in New York.   “Give It Up,” “Rubbernecking” and their best known song “Dominos” wound down their set.  They left us on a high note with “Lose Your Mind.”  And I about did.  So good.

Brief highlights of other acts I caught include “Undiscovered First” by Feist on the Outdoor Stage and “Australia,” “Simple Song” and “Bait and Switch” by The Shins on the Coachella Stage.  Saturday was too packed full of acts to see their entire sets, but catching a few by each was worth it.  Feist featured three back-up singers who seemed to be scared to death of her.  I’m sure she’s lovely, but they would sing into one mic and pay close attention to the quirky Canadian singer with eyes bugged out in fear.  Perhaps the Heineken Lights were kicking in?  I don’t know.  Still, she sounded great.

After more Heineken Lights and a piece of spicy pie, I caught Swedish indie band Miike Snow on the Outdoor Stage.  About to embark on a huge tour to support their new album Happy To You, they opened with their new single, “The Wave.”  A quick note about the video editing skills of the Coachella staff:  Seriously smart and nimble, cutting from all angles — in real-time.  The screens on every stage were live action music videos.  Kudos to the producers for pulling together such a crack team, it was very impressive.  That said, Miike Snow used the video screens to project cool imagery and their iconic rabbit/buck symbol.  Front man Andrew Wyatt led the way with “Cult Logic,” “Pretender,” “Silvia,” “Black & Blue,” their wildly catchy “Paddling Out,” “Black Tin Box” and closer and fan favorite “Animal.”   Will see these guys again in New York in a couple weeks.  Looking forward to a longer set, hearing my favorite new track, “Devil’s Work” (sadly absent from the set list) and seeing Penguin Prison open up for them. 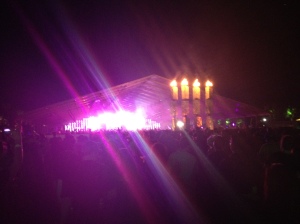 On top of all those great acts, I caught four DJ sets, or at least parts of them.  First was Jacques du Cont, the French alter ego for the DJ work of superstar producer Stuart Price.  Slick and sexy, du Cont had legions of mid-afternoon kids on ecstasy reaching the rafters early, culminating with his stellar remix of The Killers “Mr. Brightside,” one of my all-time favorites.  French maestro Martin Solveig also had a relatively early time slot and he did not disappoint.  I’m partial because he sampled “Big in Japan” and “Boys and Girls” featuring Dragonette, and closed with his monster smash from last year, “Hello” (also featuring Dragonette).  David Guetta sort of bored me.  Despite opening with his amazing single featuring Sia, “Titanium,” this set was all about David Guetta.  Even the graphics and light show featured only his name.  As SNL’s Judy Grimes would say, “I give it two ‘Mehs’ and one get over yourself, man!”  Finally, there was Kaskade.  Ah, Kaskade.  They are classy with a C.  If there was ever a definitive class act DJ, it’s Kaskade.  So polished, so lush, so perfect.  I still love “Angel on my Shoulder” to this day.  How could Sunday possibly top Saturday?