English band Keane is making the rounds supporting their fourth studio album Strangeland, somewhat a hybrid of their piano-led alt-rock 2006 album Under the Iron Sea and their more pop-driven 2008 album Perfect Symmetry.  To me, it’s just Keane at their finest, despite critical reviews of their new album.  I’m a fan, not a critic. They are comprised of lead vocalist Tom Chaplin who has one of rock’s best voices, pianist Tim Rice-Oxley, the sonic core of the band, drummer Richard Hughes and guitarist Jesse Quin who officially became a full-time band member last year.  Together they’re anything but in strange land.

They opened with the lead track off Strangeland, “You Are Young.”  It’s the perfect song to showcase Chaplin’s towering vocals and Rice-Oxley’s deft skills behind the keys.  The song also stays true to Keane’s penchant for soaring crescendos.  Obviously, I loved it.  Next was “Day Will Come,” another powerful ode to dreams coming true.   “Everybody’s Changing” and my current crush off the new album “The Starting Line” permeated the gilded Beacon Theater, as did the next five songs.  Each represented a quality I love about Keane:  “Spiralling” has massive energy. “Neon River” perfectly balances Chaplin’s vocals and Rice-Oxley’s mad pounding on the piano. “Bend and Break,” perhaps my all-time favorite Keane song that inspired fist-pumping from Chaplin as if he were the lead in Les Miz. “A Bad Dream” because it projects dark and somber beautifully.  And “Perfect Symmetry” for it’s shear genius, message and bridge.

I have seen Keane three times now — Radio City, outdoors at the Williamsburg Waterfront and now the Beacon.  All big venues.  All places where Chaplin likes to climb on boxes like a meerkat.  But I really want to see them at Joe’s Pub, Bowery Ballroom, The Box.  Chaplin’s somber, nearly a capella sample of “Strangeland” is the reason why.  So pure, so perfect. I could listen to him sing all night long, and I don’t say that about too many male vocalists.  I just don’t know how drum-driven songs like “On the Road” would play in a small venue.  I think that song is Keane’s next “Bend and Break.”  More vocal octave jumping and fist pumps from Chaplin.

I have to tell you about every song they sang because their songbook has grown deep and every one of them is a gem.  “We Might As Well Be Strangers,” “Disconnected,” “This is the Last Time,” “Somewhere Only We Know” and Under the Iron Sea stand-out, “Is It Any Wonder?” preceded the beautiful “Bedshaped,” one of Keane’s earliest recordings and “Sovereign Light Cafe,” clearly the band’s favorite new song to perform.  For the encore, the guys squeezed three songs into 12 minutes:  “Sea Fog,” gorgeous.  “Silenced By The Night,” their latest single.  And “Crystal Ball,” the song that put Keane on the map in 2004.  My crystal ball predicts Strangeland will continue to cement Keane as one of the world’s foremost and influential rock bands.  Now if the U.S. would only pay attention. 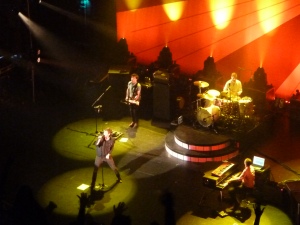