Two and a half hours.  That’s how long Fleetwood Mac played, a band that has been around for five decades.  It’s been with baited breath I’ve waited for this show since tickets went on sale at the start of the year.  Mick, John, Lindsey and Stevie are not ones who simply show up for gigs and go through the motions.  They slayed me.

Mick describes John McVie as the backbone of Fleetwood Mac.  While the most introverted of the remaining bunch, McVie’s spirit erupted slowly through his bass guitar in “The Chain.”  His guitar work and Lindsey Buckingham’s stole the show.  “Big Love” is usually Buckingham’s big guitar solo but his work on “I’m So Afraid” ended with him slumped over on stage while 2-3 minutes of resounding applause and ovation engulfed him.  He’s pretty incredible.

Other highlights of the night outside of their long string of hits included the Stevie Nicks penned “Sisters of the Moon” off Tusk.  She said they hadn’t played it as part of a Fleetwood Mac setlist since the late 1970s.  Pretty impressive.  Two more favorite moments happened during their two encores. Yes, two.  The first was “Silver Spring.”  I just love it and always have.  The other was the show closer with Stevie and Lindsey tenderly performing “Say Goodbye,” a song Lindsey wrote to mark the closure of his torrid relationship with Stevie as lovers.  It was also the only song they performed off their 2003’s Say You Will album.  Say you won’t take another three years to tour again. 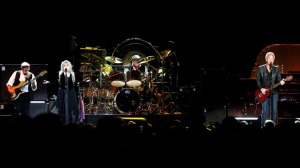