Mary Fahl returned to me a few months ago at a London Grammar show in Brooklyn. Hearing Hannah Reid perform songs like ‘Rooting for You’ and ‘Wasting My Young Years,’ I was transported back to my 20s, living in Atlanta with my roommate Chad, listening to October Project songs like ‘Now I Lay Me Down’ and ‘Wall of Silence’ on repeat on our massive stereo. Once you hear distinctive contralto voices like Mary and Hannah’s, they haunt you forever.

When writing up the London Grammar show, I looked into what Mary was up to, and low and behold she had a show coming up at the Cutting Room. So I nabbed a solo ticket for my date with Mary. She opened with her favorite October Project song, ‘Deep As You Go,’ which was on the second of only two albums October Project put out, and ‘Return to Me.’ Since departing October Project, Mary has put out a few albums with Love and Gravity being her latest, back in 2013. She performed the gorgeous ‘Gravity’ which is about her husband, ‘Like Johnny Loved June’ about the famous Cash couple, and a Joni Mitchell cover, ‘Both Sides Now.’

But she knows, and I know, her stint with October Project is a big part of her legacy. ‘Bury My Lovely’ and ‘Take Me As I Am’ were songs inspired by Anne Rice’s book, Interview with the Vampire. So ’90s and on brand for the dark wave/Goth rock band. They lobbied for their inclusion on the soundtrack, but lost out to Guns ‘n Roses, who carried more weight and influence at the time. In my heart, they still represented a lonely voice in that time of my life.

After a short intermission, Mary returned with her band to cover the entire Pink Floyd masterpiece, Dark Side of the Moon. While I have never been a huge fan of Pink Floyd, my childhood best friend Tyler was. He passed away at 19. There were moments in ‘Speak to Me’ and ‘The Great Gig in the Sky’ that I felt he was with me. You see? Mary still casts her spell on me.

I had a moment to meet her after the show. She was interested in knowing if I was an October Project fan and if I had seen her before. The answer was yes to both questions — at the Roxy Theater in Atlanta. Her memory of that gig was that they served shrimp in the green room. So there’s that. After bantering about Hannah Reid and London Grammar being the second coming of October Project, she was kind enough to sign a copy of Love and Gravity for me and my dear friend Chad. Thank you for the music, Mary. 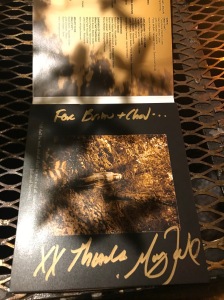 Mary Fahl and her band covering Pink Floyd’s Dark Side of the Moon: