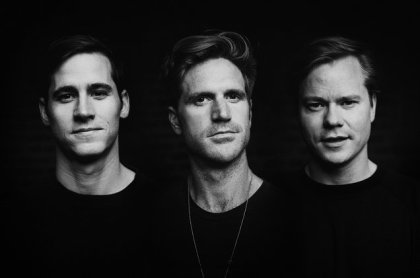 I’ve been a fan of NYC-based VHS Collection for a couple of years now, but until I saw them at Irving Plaza on their Retrofuturism Tour, I didn’t realize I was part of straight bro culture. Admittedly, I’m judging the crowd solely from my small pocket at the back, left-side railing, and the drunk girl thrashing her drink about while ‘dancing.’ Still, enjoyed the sounds of front man James Bohannon (above, center), dreamy guitarist Conor Cook (left and unfortunately cropped out of my featured image) and keyboardist Nils Vanderlip. I read they work with Chris Zane, a London-based producer who works with Passion Pit and St. Vincent, who I’m slightly obsessed with, so I’m not completely off-base.

New singles ‘Dreaming’ and yet-to-be released ‘Fire’ were highlights for me, along with recent singles ‘Animal’ and ‘Sign.’  ‘Waiting on the Summer’ was a big crowd favorite, partly because it’s a fun song and partly because it’s late March  in New York.  I’ll admit I’m more into their recordings than their live performance — perhaps their name foreshadows that. Listen to them a few times, you might be hooked, and remember when you’re done: Be Kind. Rewind.