Its been many moons since I first laid eyes on Janelle Monáe.  At least a decade, and I’m still in awe of her now as I was then. I caught one of her the final shows of her Dirty Computer tour, a show I caught last year but failed to write up.  So here we go.

It was my first concert at the newly christened Pier 17 at the South Street Seaport. Sponsored by Heineken, the venue is a beautiful setting and they sell Heineken 0.0 non-alcoholic beer.  I swear I’m not getting a dime from the Dutch brewers, but I will recognize New York venues that wake up to growing demand for non-alcoholic beverages that aren’t sugar-packed soft drinks.  Ok, getting off my beer barrel now.

Janelle Monáe collaborates with artists as varied as Brian Wilson of the Beach Boys, hip hop producing legends Pharrell Williams and Big Boi, and a posse of fierce friends: Zoë Kravitz, Erykah Badu, Solange, Grimes, and Miguel. She’s influenced by the artists I grew up with: the Michael Jackson, Janet Jackson, Prince, Outkast, TLC — all of whom are present in lyric, look, or guitar hook.

‘Crazy, Classic, Life,’ ‘Screwed’ and ‘Django Jane’ set the tone for Janelle’s current work, and ‘Q.U.E.E.N.,’ Electric Lady,’ and ‘Primetime’ represented the legacy and influence of her last album. While no guests joined her on stage, she was flanked by a powerful battalion of female musicians and dancers.  If I could have any role on this tour, I’d be the gorgeous and mighty trombone player. I loved her on ‘Tightrope.’ Evoking Prince on guitar and Janet Jackson circa Rhythm Nation, she made us feel as if the purple one was still with us. 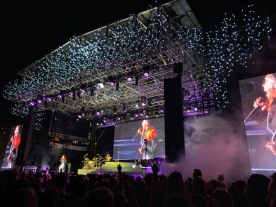 My favorite moments included a throwback of ‘Many Moons’ from her first EP, and the closer ‘Come Alive’ from the Archandroid.  Her gift at dancing, singing and acting will continue. I question her choice to play DJ at one point.  It didn’t work, but applaud her for continue to push her boundaries of her art.